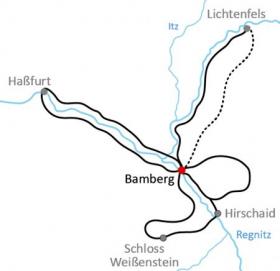 At a glance
Eating and drinking
There is a wide variety of cafes, restaurants, bistros, snack bars and places to shop all along the cycle path. That is why we do not offer half board. An evening meal costs approx. EUR 10-20 per person. Of course, you can eat more economically or even more exquisitely.

Bamberg - based in one hotel

Bike tour in all four cardinal directions, 5 nights from 399 €

Spend a short vacation in the Franconian city of Bamberg, once the seat of the prince-bishopric of the same name. There are many breweries in the city, vouchers for 2 liters of beer are already included. The bike tours take you into the surrounding countryside, up and down the river Main, with lots of nature and medieval times, with thermal baths and museums. This tour in Bamberg - based in one hotel is also suitable for the inexperienced.

Day 1 Arrival in Bamberg
Enjoy your first evening in the winding alleys of the historic centre with a hearty Bavarian beer.

Day 2 Excursion to the main marsh forest, 35 km/ 22 mi
The bike tour leads to the legendary pine forest, where you can enjoy the beer at the Kunigundenruh at Hartmanns.

Day 3 Excursion to Haßfurt, 65 km/ 40 mi
Along the Main River, the route leads to Haßfurt, which is not only a charming medieval town. The municipality produces all its energy from renewable sources, including the production of hydrogen gas.

Day 4 Excursion to Lichtenfels, 45 km/ 28 mi
The train takes you to the pretty town of Lichtenfels (not included), once the center of basket-making. Also visit the spa and baroque town of Bad Staffelstein, where the arithmetician Adam Ries worked in the beginning.

Day 5 Excursion to the Castle of Weißenstein, 65 km/ 40 mi
The bike tour leads to the baroque magnificent castle near Pommersfelden, which was built by the prince bishop of Bamberg at the beginning of the 18th century. A guided tour provides insight into the living ideas of the high nobility of the time.

Day 6 Departure or extension
Your tour ends after breakfast. Why not extend your holidays "Bamberg - based in one hotel"?

Included in your package "Bamberg - based in one hotel":

All prices apply per person in a double room, incl. breakfast.

Arrival for "Bamberg - based in one hotel":